Creator:
Theophilus Adam Wylie family
Abstract:
The individuals represented in this collection are primarily members of the Theophilus A. Wylie family, immediate and extended. However, there are many hundreds of letters written to the family by friends far and wide. The bulk of the collection dates from 1850 through 1930, roughly the lifespan of Louisa Wylie Boisen, daughter of Theophilus A. and Rebecca D. Wylie, who was largely responsible for preserving the letters. The entire body of correspondence was part of the bequest to Wylie House Museum from Morton C. Bradley, Jr., great-grandson of Theophilus A. Wylie.
Extent:
35 linear feet
Language:
Materials are in English
Preferred citation:

This collection of personal correspondence was handed down through the Theophilus A. Wylie line of descent. It is arranged chronologically with no subseries. While most of the letters are from family members, both immediate and extended, there are also hundreds of other letters written by friends of the family. The letters for the most part detail daily life and local news of the correspondents and are often filled with minute details such as the cost of goods or what was planted in the garden or served at a special meal. Sometimes, both sides of a correspondence are represented, e.g., the letters written by Louisa Wylie Boisen to her husband Hermann B. Boisen and his replies to her, or Louisa's letters to her parents and their replies. The correspondence of two unmarried sisters of Rebecca D. Wylie who lived for many years in Bloomington and died here is also included in the collection. The Wylie family travelled a good deal and had a large circle of friends, many of them associated at one time or another with IU or the Presbyterian Church. Their letters come from far and wide, from Philadelphia and New York to California, the Dakota Territory, and Mexico.

Samuel Brown Wylie (1773 – 1852) Father of Theophilus A. Wylie. Emigrated from Ireland in 1797; married Margaret Watson in 1802. Academic who taught at the Theological Seminary of Philadelphia (1810 – 1817) and the University of Pennsylvania (1828 – 1845) and well-known Reformed Presbyterian minister in Philadelphia for 50 years.

Theophilus Adam Wylie (1810 – 1895) Born and educated in Philadelphia. Graduated from the University of Pennsylvania in 1830, studied theology in the Seminary of the Reformed Presbyterian Church, and was licensed to preach in 1836. He later received the honorary D. D. from Miami University in Ohio; Monmouth College in Illinois; and Princeton College in New Jersey. An honorary L.L.D. was bestowed upon him by the University of Pennsylvania. Came to Bloomington in 1837 to teach natural philosophy and chemistry at Indiana College (which became Indiana University in 1838). Was an active faculty member until 1886 except for 2 ½ years in the early 1850s which he spent at Miami University in Ohio; then professor emeritus until his death. Served as IU's librarian for 38 years.

Louisa E. M. Wylie Boisen (1839 – 1930) Eldest child of Theophilus and Rebecca Wylie. Educated at the Monroe County Female Seminary in Bloomington, Indiana and Rev. Scott's Female Seminary in Oxford, Ohio. Graduated from the Glendale Female College where she then taught for one year. Graduated from Indiana University in 1871. Taught at the University of Missouri from 1872-73. Married to Hermann B. Boisen in July 1873, and widowed in Jan 1884. Mother of two: Anton T. Boisen and Marie Louise Boisen Bradley. Brought her two young children home to her parents' house after her husband's death and raised them there.

Hermann Balthasar Boisen (1846 – 1884) Immigrated to US in April 1869 and invited to chair the Modern Language Department at Indiana University in 1870. Later taught at the Normal School in Terre Haute (later Indiana State University), Williams College in Massachusetts, in the public schools of Boston, Mass. and finally at Lawrenceville School in New Jersey, where he died of heart failure.

Marie Louisa Boisen Bradley (1879 - 1965) Daughter of Louisa Wylie and Hermann B. Boisen. Marie grew up in Wylie House, graduated from IU in 1900 and married Morton C. Bradley in June of that year. The couple had two children: Louise Bradley and Morton C. Bradley, Jr.

Morton C. Bradley (1878 - 1954) Born and raised in Benton County, Indiana, Morton attended IU where he met his future wife Marie Boisen. He graduated in 1899 with a degree in mathematics. Worked for many years as controller for the Boston and Maine Railroad.

Arthur Calvin Mellette (1842 – 1896) Born in Henry County, Indiana; graduated from Indiana University in 1863; served in Company H of the Ninth Indiana Volunteers during the Civil War. Returned to Indiana University following the war and took a law degree in 1866 and was admitted to the bar. Practiced law and owned a newspaper in Muncie, Indiana. Served as a member of the Indiana legislature from 1872 to 1874. Took his family to the Dakota Territory in 1878 hoping the dry climate there would improve his wife's deteriorating health. Practiced law and then became last governor of the Dakota Territory and first governor of the State of South Dakota. Left the governorship in January 1893; moved to Pittsburg, Kansas in 1895 and died there a year later.

Theophilus Andrew Wylie (Toph) (1852 – 1878) Son of Theophilus and Rebecca Wylie; called Toph or Phandy (as a toddler) by his family.

Samuel Brown Wylie (1854 – 1890) Called Brown by his family, this son of Theophilus and Rebecca Wylie graduated from IU in 1876. Assistant in the IU department of Physics and Chemistry for a few years, then appointed Professor of Physics in Geneva College, Beaver Falls, Pa. Died of Bright's Disease leaving his wife and four children.

Sarah Seabrook Mitchell Wylie (1857 – 1899) Married Brown Wylie in 1876 and with him had six children, four of whom survived. Soon after being widowed, she took her eldest son Theo to Boston with her and left the younger three at Wylie House where they were raised by their Aunt Louisa Boisen and their Grandmother Wylie.

Theophilus A. Wylie (Theo) (1878 - 1960) Called Theo by his family, he was the eldest son of Brown and Seabrook Wylie. Went with his mother to Boston after his father's death in 1890 and eventually became a commercial photo engraver.

Samuel Brown Wylie (Sam) (1882 – 1970) The second son of Brown and Seabrook Wylie, Sam stayed at Wylie House after his father's death, was raised by his grandparents and his aunt Louisa Wylie Boisen. A talented artist, Sam worked on the IU yearbook (the Arbutus) staff in 1901. He moved to Boston and then New York where he became a commercial artist.

Rebecca Wylie (1884 - ?) The only daughter of Brown and Seabrook Wylie, Reba, as she was called by her family and friends, was also raised in Wylie house by her grandparents and Aunt Louisa. She moved to Tucson, AR in 1913 where she lived for a year or so with her younger brother Laurence. Married in Mexico City to Harry E. Grace, originally of Texas, in May 1926. Unknown death date.

Laurence Seabrook Wylie (1887 – 1962) Called Laurie by his family, he was the youngest son of Brown and Seabrook Wylie. He was raised by his grandparents and Aunt Louisa in Wylie House; attended but did not graduate from IU. Went to the Southwest originally in 1908 for health reasons, then moved there permanently in 1913. Married Ethel M. Goshert of Warsaw, Indiana in June 1914, and moved to southern CA soon after. He eventually became an architectural draftsman. Had five children with his wife Ethel.

Theodorus William John Wylie (1857 – 1934) Youngest son of Theophilus and Rebecca Dennis Wylie; called Dory or Dode by his family. Graduated from IU in 1877; married Fannie Thompson in 1882; widowed in 1895; no children.

Theodorus William John Wylie (TWJW) (1818 – 1898) Only brother of Theophilus A. Wylie and well-known Presbyterian minister in Philadelphia. Took over his father's congregation when he retired. Twice married. With his wife Louise Lowrie, had six children, four of whom lived to adulthood: Jane/Jennie, Margaret, Louisa, and Samuel Brown. Married Jessie Grant after the death of Louise Lowrie; no children born of that union.

Louisa Lowrie Wylie (1862 – 1946) Daughter of Theodorus W. J. Wylie. Married Henry Dryer Hatch, a dentist in 1895 and with him had one living child: Norman Lowrie Hatch.

Margaret Thomson Wylie McLeod (1806 – 1896) Sister of Theophilus A. Wylie; married John Neil McLeod in 1830 and with him had eight children.

Susan Emma Dennis (1821 – 1899) Unmarried sister of Rebecca Dennis Wylie. Lived with the Wylie family in Bloomington from 1872 through 1876, then ran a boarding house in town with her sister, Elizabeth (Lizzie).

Elizabeth Sargeant Dennis (1830 – 1908) Youngest sister of Rebecca Dennis Wylie, called Lizzie. She lived with the Wylies for a few years in the 1850s, then returned to Bloomington, IN after her mother's death and ran a boarding house with her sister Susan Emma Dennis until her death. Never married.

Cornelia Millen Dennis Trimble (1828 – 1904) Sister of Rebecca Dennis Wylie who lived in the Philadelphia area. Married Richard Trimble in 1856; widowed early; she had no children.

Adelaide Marion Dennis Speck (1826 – (-1881)) Sister of Rebecca Dennis Wylie; married Dr. Frederick Speck, with whom she had four children; family moved to Kansas in 1850s. Adelaide died at Wylie House while on a visit to her sister.

Harry Clay Egbert (1839 – 1899) Only son of Caroline M. Dennis Egbert, niece of Rebecca Dennis Wylie. Married Ellen McWilliams Young in 1870 and with her had five children. Served in U.S. Army; Lt. Col. who served in the Philippines in the Spanish American War and died of an injury sustained during that conflict.

Annie Matilda Speck Cornell (1849 – 1928) Daughter of Adelaide Dennis Speck, niece of Rebecca Dennis Wylie. Married to Douglas E. Cornell in 1868 and with him had six children.

Mary Caroline Speck Snedden (1851 – 1925) Daughter of Adelaide Dennis speck, niece of Rebecca Dennis Wylie. Married James Snedden and had one daughter. Served as matron of the Kansas Mason Home in Wichita for many years.

Anna Thankful Ballantine (1842 – 1915) daughter of Professor Elisha Ballantine; lifelong friend of Louisa Wylie Boisen; Anna received her early education at the Monroe County Female Seminary and graduated from the Ohio Female College at Glendale in 1861, receiving the degree A.B. She taught Latin at Glendale after graduation and later returned to Bloomington where she taught Latin in the Preparatory Department of I.U. Upon her father's death in 1886, Anna left Bloomington and went to Fisk University in Tennessee where she served as principal of the ladies department for 20 years.

Anna Dennis Carrier (abt 1857 – 1921); Unofficially "adopted" by Emma Dennis, Anna's birth name was Dolan; her birth mother was a poor Irish immigrant washerwoman. She lived with Emma and Elizabeth Dennis in Bloomington, IN and attended IU from 1875 – 1878. Married Augustus Carrier in 1885 and lived with him in Chicago, with a summer home in New York State.

Eliza J. Read McFerson (1818 – 1913) sister of IU professor Daniel Read; widowed in 1846 (husband the Rev. Alexander McFerson); came to Bloomington where she served as principal of the Monroe County Female Seminary. Moved to Glendale, Ohio in the 1850s where she was assistant principal of the Glendale Female College.

This collection is organized chronologically at the item level. 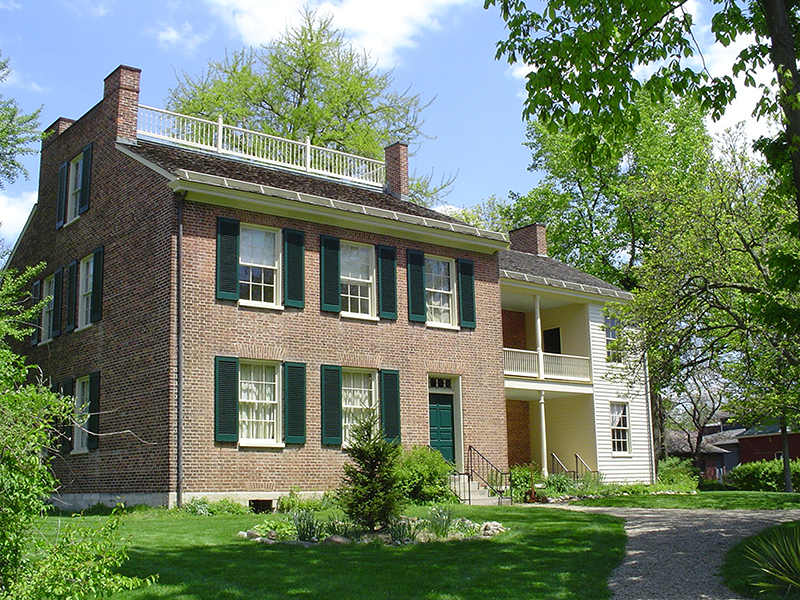