Creator:
Horowitz, Alan Stanley, 1930-
Abstract:
Alan Stanley Horowitz was curator of paleontology and part time professor of geology at Indiana University from 1966-1996. His collection consists of materials relating to his research interests and position at IU, including geological and paleontological research, publications, and records relating to professional organizations with which he was involved.
Extent:
1 box, 2 boxes, 1 box, 1 stack of envelopes, 3 card catalog drawers, 4 file folder cabinets, and 1 tray of materials in locked cabinet.
Language:
Materials are in English
Preferred citation:

Alan Stanley Horowitz was born on June 12, 1930 in Ashland, Kentucky. In 1948 he entered Washington and Lee University in Virginia and earned a B.S. degree in 1952. Horowitz completed graduate coursework at The Ohio State University and in 1954 entered the doctoral program at Indiana University, receiving his Ph.D. in 1957. After completing school, Horowitz went to Littleton, Colorado where he took a position as a research geologist with Marathon Oil Company. In 1966 he returned to IU as curator of paleontology and later became part time professor of geology. By his retirement in 1996, Horowitz was the author or co-author of 53 papers, 57 abstracts and several other written works. He also received the Owen Award, which is presented to a distinguished alumnus of the IU Geology Department. A longtime member of the Paleontological Society, Horowitzâs primary areas of research involved stratigraphic and taxonomic analysis of blastoids and bryozoans. Dr. Horowitz passed away on February 18, 1999 after battling leukemia.

Co-authored, ca. 1948-1980s includes prints and negatives, specimen slides, and slides for teaching that were co-authored with Thomas Gregory Perry.

This collection is open for research. Advance notice required.

Photocopying permitted only with permission of the Curator(s) or Collections Manager of the Paleontology Collection. 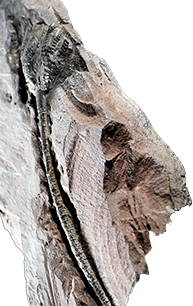